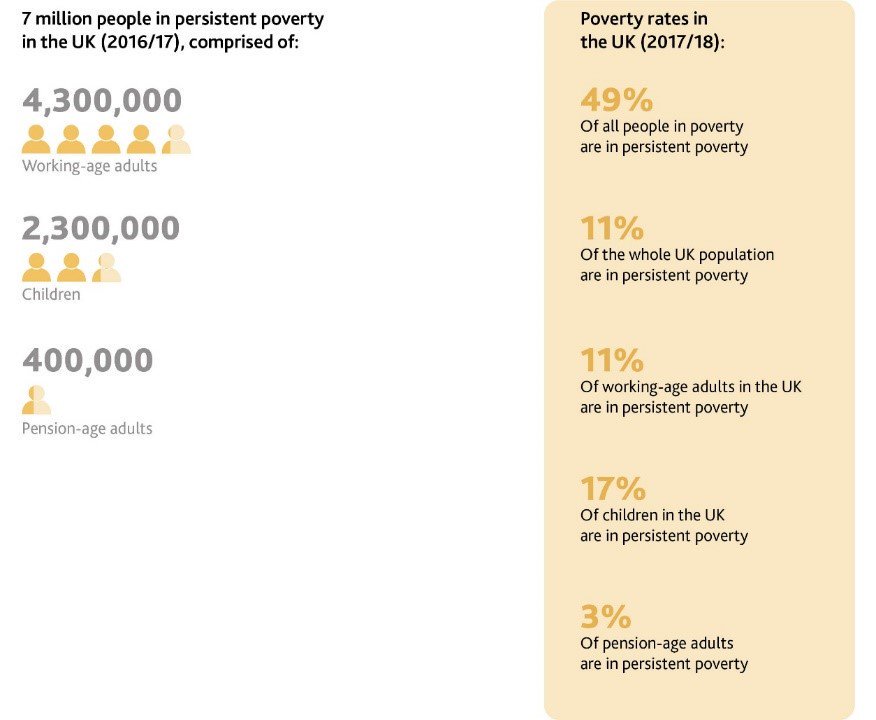 Today the Social Metrics Commission,  founded in 2016 to develop a new approach to poverty measurement because the UK no longer had an official measure of poverty for children, adults or pensioners has published its latest report on UK poverty today

In developing a new set of metrics, the commission wanted metrics that better reflected the nature and experiences of poverty and one which could be used to build a consensus around poverty measurement and action in the UK. So what are they saying this year?

Let’s start by considering the UK total population which was 66.04 million people in 2017 (The most recent accurate estimate).

The key messages in this report indicate that there are 14.3 million people in poverty in the UK. This includes 8.3 million working-age adults; 4.6 million children; and 1.3 million pension-age adults.Indicating that despite  minor fluctuations, overall rates of poverty have changed relatively little since 2000.

However, this trend hides significant changes in rates of poverty among different groups. Poverty rates in pension-age adults fell steadily from 19% in 2000/01 to 9% in 2014/15 but have since risen slightly to 11%.

On average, those in poverty have moved closer to the poverty line now than would have been the case in 2000/01. However, a third (31%) of people in poverty – 4.5 million people – are more than 50% below the poverty line, and this proportion has not changed since the millennium.

7 million people are living in persistent poverty meaning they have been in poverty for at least two of the previous three years and are still in poverty now with not much chance of an escape given the current economic situation.

Two questions pensioner poverty is going up, why? Child poverty is not coming down despite several government attempts to tackle it over the years.

Some thing new the report shows; nearly half of people in poverty live in a family where someone is disabled. This is shocking, and has clearly been overlooked by government for many years. Surely this need to be addressed